Falkor’s journey from Nah Trang, Vietnam to the island of Guam was over nearly 1200 nautical miles of open ocean, of which the majority is uncharted – despite being in an area of strong scientific interest. Even with no scientists on board, Schmidt Ocean Institute’s Technicians always aim to run a suite of science sensors as we transit. The data acquire is then sent to the various oceanographic repositories around the world for others to use.

Once Falkor’s bridge team have planned their route, the technicians review it and look at maximizing multibeam and sensor data. This may involve moving the track a few extra miles in one direction so it doesn’t run over previously acquired data from Falkor or other hydrographic ships in the community. These little tweaks may add several hours to the transit, but the value of this new data to our understanding the oceans is worth much more than the extra time it takes. Many exciting discoveries have been made by research vessels that have been transiting between science expeditions.

A Discovery of the Past

During the initial route planning from Vietnam to Guam our team noticed a big area that was not mapped, so we decided to modify the ship’s transit through this little-studied area. In the back of my mind something registered that this area was important, but I couldn’t quite figure out why the location 12 N 134 W was so memorable. Later that evening, I was reading a book and it hit me in one of those random face-palm moments. A quick search on the internet revealed that our new route took us over the position where the USS Indianapolis is reported to have sunk. The sinking of the USS Indianapolis led to the greatest single loss of life at sea in the history of the U.S. Navy. The USS Indianapolis was a Portland-class cruiser of the United States Navy and named for the city of Indianapolis, Indiana. 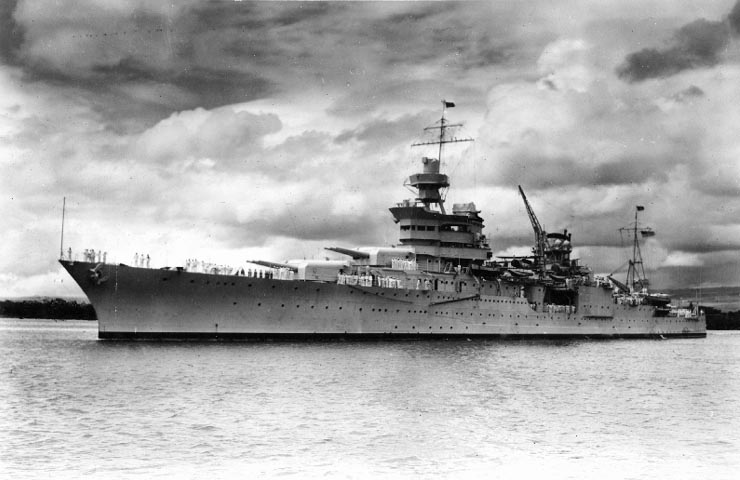 The USS Indianapolis was a flagship for Admiral Raymond Spruance while he commanded the Fifth Fleet in battles across the Central Pacific during WWII. On July 30th, 1945, after delivering parts for the first atomic bomb to the United States air base at Tinian, the ship was torpedoed by the Imperial Japanese Navy submarine I-58, and sank in 12 minutes. Of 1,196 crewmen aboard, approximately 300 went down with the ship. The remaining 900 faced exposure, dehydration, saltwater poisoning, and shark attacks while floating with few lifeboats. The Navy learned of the sinking when survivors were spotted four days later by the crew of U.S. aircraft on routine patrol. Only 317 survived.

Searching for the Indianapolis

Our science mission now had an additional dimension to it. I discussed the information with our team and decided to use some of our available buffer time to run a survey around the last known location of the USS Indianapolis. Even with a multibeam system as advanced as Falkor’s, detecting the wreck of the Indianapolis in depths exceeding 5,000m would be very difficult – our systems are better suited for science applications and mapping terrain. In my free time I read up on the USS Indianapolis and the crew as they drifted for five days in the middle of the Philippine Sea. The main objective was to expand our understanding of the area and make that data available to the community.

We arrived in the wreck vicinity in the early evening of May 28th, 2016. As we approached the survey area a pod of dolphins played on the bow. The evening sky was beautiful and the Falkor’s crew crowded out on deck as the ship slowed down to a survey speed of seven knots, beginning to follow the same route the Indianapolis would have been steaming along. It was difficult to reconcile the beauty of this place with the fact that it had been the scene of the U.S. Navy’s worst disaster during WWII.

Our survey planning was mainly based on depths from satellite data to give an approximation of the seabed topography. However, our survey plan soon evolved as we began to understand the terrain Falkor was surveying. The initial survey depth was around 5,500m but soon shallowed to 2,000m. We passed over the location where the USS Indianapolis is reported to have sank, and came across a seamount over 2,000m high. Over the next 12 hours the team recorded three seamounts and a large flat topped seamount known as a Guyot.

As daylight approached and the sun poked over the horizon, we concluded our mapping covering 150 nautical miles and making over three million soundings. The ocean still keeps the Indianapolis resting place a secret, but at least we now have mapped a new and interesting area.

With the survey complete and new acquaintances made, the final step was to honor the Indianapolis’ crew. As Falkor had discovered a seamount, we submitted a proposal to name the feature. I was at a loss and approached the survivor’s association for naming suggestions. They put forward the name “Indy Maru” as this was the Indianapolis’ nickname. And so the proposal to name this Indy Maru Seamount was sent to the relevant authorities for review. We also proposed the name “McVay Seamount” for a second seamount in honor of the USS Indianapolis’s captain.

A journey that started as a routine “filling in the blanks” survey turned into something much more. We may not have found the USS Indianapolis, but we added another piece to the jigsaw, met some very inspirational people, and hopefully gave some honor and closure back to the community.